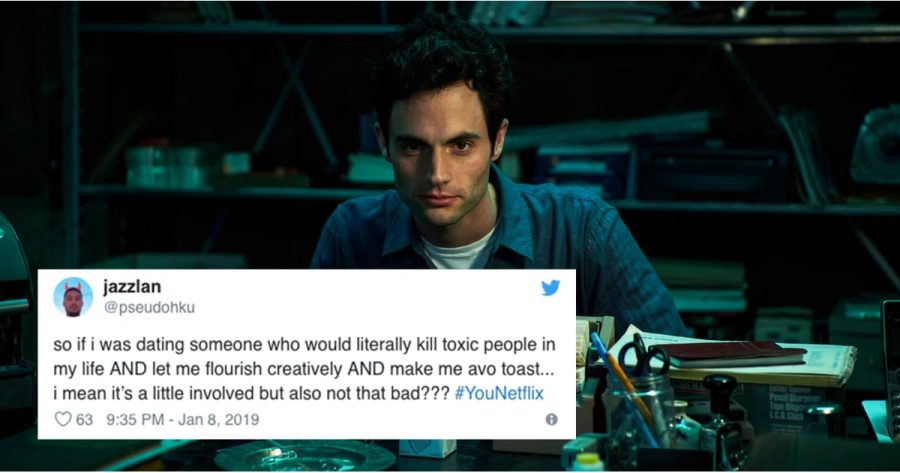 As I am scrolling through my Snapchat stories I see “I would let him murder me and I’d say thank you.”

Love and looks can blind our viewers’ eyes to seeing the meaning behind the new craze show, “You”. A show about obsessiveness and love over multiple women has been fantasized over. But when do we, as the viewers, start to say “why am I watching this?”

Penn Badgley, also known as Joe in this series, killed eight people in the two seasons and doesn’t show signs of stopping the behavior anytime soon. Young girls and women have said Joe is attractive and would be with him even if he is a serial killer.

“@PennBadgley kidnap me pls,” a fan tweeted Badgley about his portrayal.

For years, even before the famous Ted Bundy came to the spotlight, women have obsessed over and been hooked to the story of white males doing insane acts.

A PittNews article stated that “some viewers loved Joe, finding sympathy in his lovelorn trailing after Beck.”

Kidnapping is many people’s worst fear, but just because he is a smart, white male, he is excused for his gruesome actions.

Even Milly Bobby Brown, an actress in the popular show Stranger Things, stated that the character Joe “acted out of love”.  Many people criticized her and said she wasn’t old enough to understand the magnitude of his actions.

The question arises in my mind, why do we find this pleasing? How far will one woman go to make excuses for a white male.

Years ago, after Ted Bundy shows and documentaries came out, this same obsession with a serial killer began. A gorgeous male, killing innocent women. How are women seeing these killers in a positive light?

Many speculate it is because he’s a powerful white male.

“The new episodes should make people question why they’re watching the show,” says Penn Badgley in an interview with TIME.

He also asks “Do I expect him to be a good person in the end? Why do I expect that?”

Badgley often makes viewers think even more about this in his interviews when he asks the hard questions. He makes it seem as if the show’s purpose was to make you think about this exact issue.

“If everybody just ate it up and thought, ‘this is f-cked up, but it’s fun,’ that would be problematic. Some do that. At the same time, people are thinking differently about it and hopefully, it gives us a reason to further deconstruct toxic ideas we have about masculinity, gender identity, and relationships,” Badgley said.

Badgley is fully aware of the problem with the viewers reactions to his character Joe, and he has received backlash himself for speaking on it.

I believe the show is extremely interesting, but girls saying they want to be murdered crosses the line.