Taking Care of Business at State 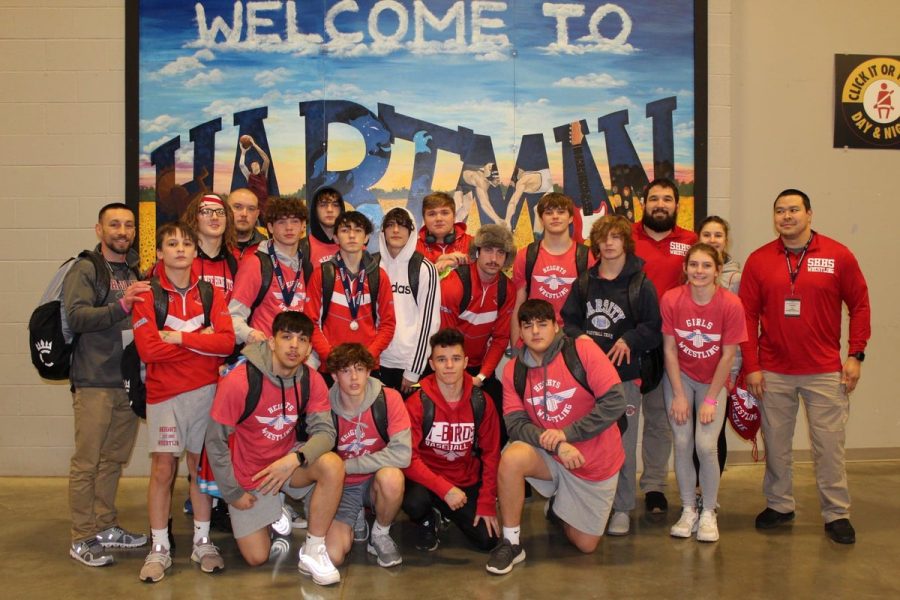 As KSHSAA recently made it legal for all-girl wrestling teams, many girls competed this season. After the first all-girls regionals, two athletes headed to the first ever official all-girls state tournament.  Amelie Jungwirth and Alexandria “Bug” Buce competed at state.

Jungwirth is a foreign exchange student and did not have school sports in Austria, where she is from. This was her first year wrestling, and she went 2-2, placing fourth. She had a 32-5 record for the season, with twenty-eight of her wins being pins.

“Wrestling is very different from any other sports that I have ever done, so basically starting from zero was not easy. You have to slowly get used to the new movements and ways to use your body. In the beginning, some things might not come as naturally but the longer you do it, the more you get a feel for it,” Jungwirth said.

Buce, being a sophomore, went 0-2 at state, though she still has two more seasons ahead of her to achieve her goals of placing at state. She ended her season with a 14-12 record.

The wrestling program has seen success for years. They won both United Kansas Conference league titles and got fourth at regionals this year. 13 of the 14 varsity boys placed in the top eight at regionals, qualifying for state.

“I need to work better on my cardio and strength, that’s where the biggest factor was and the higher weight classes have better strength than I do,” Walker said.

With both being sophomores and having two seasons ahead they both have plans to place higher on the podium.

“We are a young team, we have a better coaching staff than any anybody else, our coach works with us on mindset training,” Ferguson said.

The atmosphere of the team has a large impact on how the boys perform.

“When everyone is cheering for you and the whole team is happy you feed off that and perform better,” Walker said.

With the vast majority of varsity boys qualifying for state and two placing at state you might see that as an upset or shocking,

“This was one of the youngest teams I’ve ever coached,” head coach Chad Parks said. “It’s often difficult for first time state qualifiers to walk in and earn a spot on the podium…we are not focused on wins and losses… But our overarching focus is in these three areas: Gratitude, Effort, and Toughness. Those are the areas we can control and when we do these well, wins typically follow,” Parks said.