The Calm in the Storm

Swimmers are doing everything they can to stay safe throughout the pandemic. 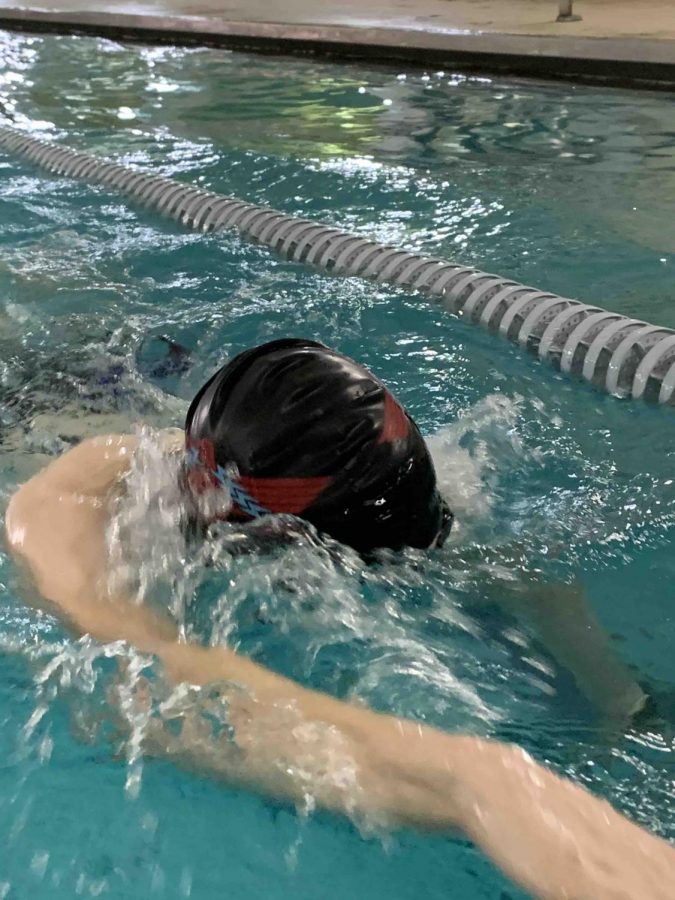 As students go back online, athletes are beginning their winter seasons. After much debate about whether they would have a season or not due to raises in COVID-19 cases, the boys swim team was ecstatic to hear they would be having their season. With the decision to have winter sports, the athletes and coaches were forced to put some new rules and precautions in effect for the 20-21 season.

“We are only swimming with the people that have been in our lanes,” freshman Alex Austin said. “We make sure to wear masks during breaks and take them in different places. We also wear masks whenever we group up.”

The same protocols are followed at the swimming meets.

“We have to keep on our masks until we are behind the blocks and have separate resting areas during breaks,” junior William Birch said.

With the team having to stay in separate lanes and take breaks separate from one another, there isn’t much time or ability to have team bonding or even get to know your teammates.

“I don’t really know the upperclassmen because we have to separate,” freshman Jake Emmons said. “I really only get to know the kids in my lane and the lane next to me.”

Only knowing the teammates from the lanes next to them has separated each of the swimmers from meeting their other teammates.

“I don’t know much of the team, I only know the kids on my side of the pool,”  Austin said.

One of the precautions that were put into place this season for the swim team was that spectators would be limited and there would not be a student section. Past swimmers have always been able to look to a roaring crowd and a supporting student section when they need encouragement during their meets. Now swimmers are being faced with silence and empty bleachers.

“This was my first year of swimming and my parents are disappointed they can’t see me swim. It’s hard not having them there,” Emmons said. “It makes us feel better when we can go up and talk to our parents about how we did or talk to friends we have in the stands. I miss being able to have them there supporting us.”

As the number of cases in Shawnee County continues to rise, is continuing the sport’s season the best option to keep everyone safe.

“I think swim is one of those sports that can keep going apart from other winter sports,” Birch said. ”There’s no contact during the sport with the other swimmers whereas in wrestling and basketball it is all hands-on with no social distancing.”

A normal season is on everyone’s minds as we transition into the new season but these athletes wouldn’t change it at all. They are grateful to be able to participate in the sport they love and are glad they didn’t have their seasons canceled.

“Everyone that came out this year really works hard and I think they deserve this season,” Birch said.

This year has been a raging storm of uncertainty and disappointments but these swimmers have found the calm in all of it and channeled that into the sport.