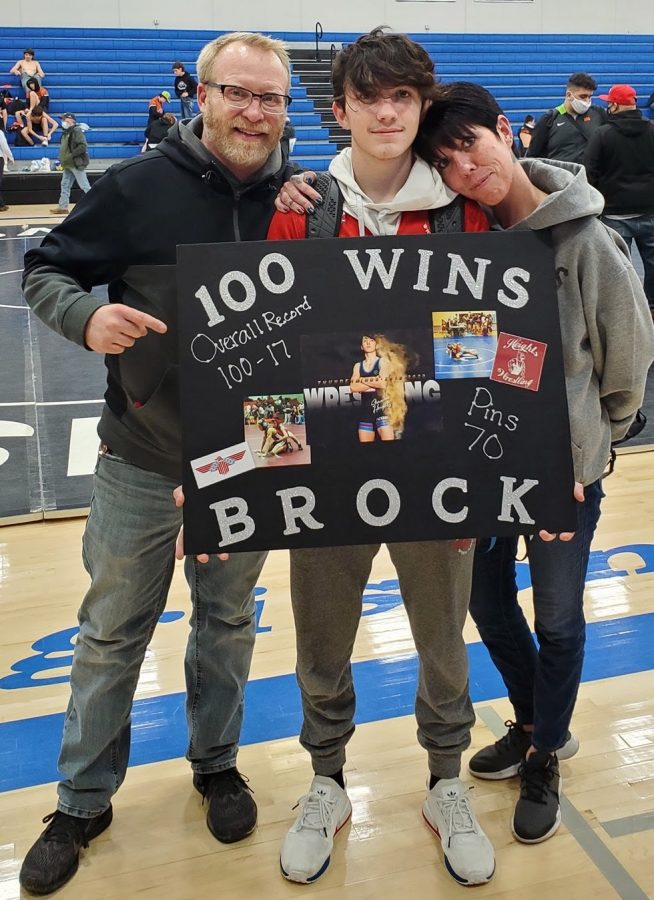 Juniors Brock Ferguson and Caden Walker both achieved their 100th win during the 20-21 season.

“Wrestling teams are limited to a given number of competitions each season, limiting the number of matches one can wrestle,” Parks said. “To hit the 100 win mark, you have to be victorious often.”

Both wrestlers achieved this milestone at a young age. According to Parks, most of the top wrestlers achieve their 100th win as a senior in high school. Ferguson was the first Heights wrestler to hit 100 this season.

“Getting 100 wins is one of my biggest accomplishments in wrestling,” Ferguson said. “Not only did I get 100 wins, I got it by my junior year which most people that get 100 career wins in high school get by their senior year. So just getting this milestone by my junior makes this such a bigger deal.”

Jan. 27 marks the day that Ferguson hit 100 while also getting his 101 and 102 wins. His teammates and coaches knew he was going to hit 100 that day so they were prepared to celebrate with him. His family made a poster board for him and Parks announced the milestone to the entire gym.

“The team knows how hard Brock works and what a great accomplishment 100 wins is in our sport,” Parks said. “It deserves props, and the entire Heights family was ready to give those props immediately.”

Ferguson and Parks both believe that his success comes from the dedication that he puts during the on and off-season. During the off-season, Ferguson travels to find the best training partners and can oftentimes be found in the gym or wrestling room.

“I believe that I’m successful in wrestling because I have always worked my hardest in practice and always try to improve on stuff that I can work on,” Ferguson said. “I feel like I’m also successful because I stay after practices and get more work in after even when everybody leaves I stay and just work on anything I need to improve.”

Ferguson’s wrestling style can be defined as aggressive because he likes to put quite a bit of pressure on his opponents. Even if he is currently losing in the match he will find ways to put pressure on the other wrestler and fight as hard as he can.

“Brock is very explosive, strong, and dangerous on the mat in every area,” Parks said. “His ability to pin people is uncanny and makes him fun to watch and coach.”

Ferguson hopes to win state this year in the 120 weight class after placing third last year. Once his high school career is over he hopes to wrestle at a collegiate level. His overall goal is to wrestle for the Olympic Team.

“I hope that Brock continues to seek success on the mats and beyond. I hope he wrestles through college, becomes an All-American, and eventually represents team USA,” Parks said. “He’s the kind of young man that can reach those levels.”

Three days after Ferguson achieved this milestone, Walker followed in his footsteps and got his 100th win. He accomplished his 100th win on Jan. 30 during the last regular season meet.

Walker had a slightly late start on the season as he had knee surgery at the beginning of November which led to him missing the first couple weeks of practice but didn’t let that stop him from putting in the work. He ended the regular season with 105 wins after winning all his matches for the day.

“My 100th win was a pretty big deal to me,” Walker said. ”I’ve been putting in the effort ever since I was a little kid to be the best wrestler I could be and it has paid off.”

His teammates and coaches were extremely excited to see him achieve this milestone as they know how hard he has worked. His father and brother were also there with him to celebrate the big moment. A banner was made to broadcast his success to the people in the gym and those who looked at the wrestling Facebook page.

It was no shocker to his coaches that he accomplished this at an earlier age than most because of how hard he works during practices and matches. He has been practicing and perfecting his moves from a young age.

“I’ve worked with Caden since he was 5 or 6 years old. I created technique videos for his Dad, and he taught Caden some of our systems as a young man,” Parks said. “Now Caden has become lethal on the mats with those systems. It’s fun to watch and to add to his skill set.”

Walker’s wrestling style on the mat can be described as funky. His opponents may think that they have leverage on him but his knowledge of wrestling allows him to get out of unusual situations. Nobody fully knows what move he is planning on doing next because of his funkiness on the mat.

“Everyone knows me as a funky wrestler because I use a lot of funky moves in my matches that a lot of people don’t use,” Walker said.

Walker is continually working on new moves and techniques that will stump his opponents. On the mat, he will do anything he can to get leverage over his opponent no matter how unusual or uncomfortable it may seem. This type of thinking and work is part of the reason why he is successful.

“Caden can use every part of his body while wrestling. The young man can use his foot to hook someone’s arm, and they have no idea what is happening,” Parks said. “He is also fearless and confident in attacking his systems. Caden will take opponents into deep waters on the mat, and they’ll realize in this ocean, they can’t even swim.”

Walker hopes to win the state championship in the 160 weight class this year after placing sixth last year. His overall goal is to beat the Kansas all-time pin record which is currently 130. He was named Wendy’s Athlete of the Week on Jan. 13 after being named the #1 ranked wrestler in the 5A for his respective weight class.

The season is still ongoing which means that both boys have the opportunity of getting 150 wins by the end of their high school career. They will both compete at regionals on Feb. 13 and plan to advance to the substate as well as the state competition.